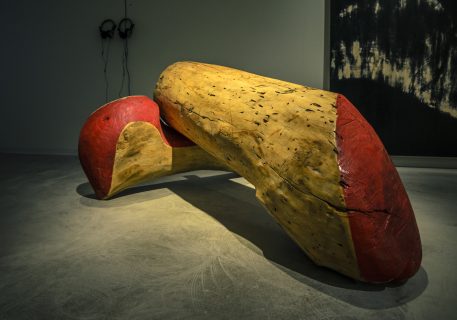 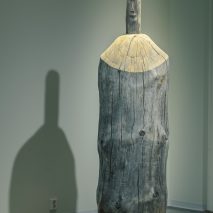 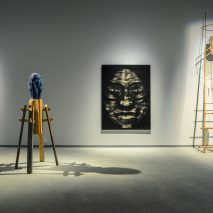 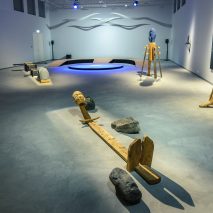 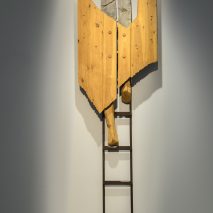 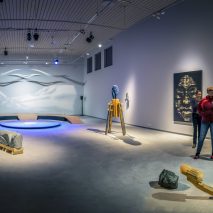 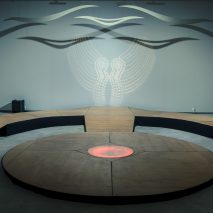 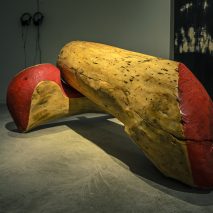 Aage Gaup is one of the most influential Norwegian artists, artistically and politically engaged in visual arts, public installations and scenography. This exhibition documents a collection that reflects the vitality, complexity and unfolding patterns of modern and contemporary art, and confirms his artistic work in a consistent position, still influential in the art world after decades of work.

Aage Gaups sculptures is covering a wide range of style and form. Staring with the 70´s political and socially engaged art, to the monumentality of the subject, the purity of line and movement in the minimalist and post-minimalism in sculpture, figurative sculpture, and further installations, relational aesthetics and conceptualism.

In his sculptures Aage Gaup works with materials such as wood, concrete and metal. He has an exceptional sense of space, and the change of a sculpture can do in that room. Gaup specializes in theatrical expression in ice and snow, and has worked with set design for film and theater.

Some of Gaups are work related to a specific context or Sami mythology, in other works, he has directed his gaze outward toward the rest of the world. Prayerhouse for Sarajevo, which are purchased by the Sami Collections in Karasjok 1994, related for example to the war in Bosnia. The three-dimensional work is five feet high and composed of horizontal and vertical structures joined together and made stable wooden dowels and wooden wedges. Knowledge of timber structures and joints that have been used in the Sami tradition, are used in this work, while the work itself comments on a reality far from Sápmi.

One critic wrote that his art is characterized by a subtle mixture of delicacy and coarseness – a kind of poetic diversity of opinion that is hard to explain. Aage Gaup once said: I want to portray an inquiring mind. Aage Gaup works with installations where the material is allowed to speak each with their tongue, and associations emerge through various information, impressions and stimuli. His sculptures have the ability to always define their own reality.

Through genuine intuition, which deftly moves between the two-dimensional and three-dimensional, shape and area, and distinctive craftsmanship in both materials and expression, Gaup has in his ability to renew and to explore means moved boundaries, and developed a unique ability to combine the tension between heritage and traditions by create and breath new life, revitalize and actualize his artistic work.

Aage Gaup, born 1943, artistic active since the early 1970s, was a member of the legendary Masi group, forerunner of the Sámi artist federation that was founded in 1979, which further established SDG in 1986.

Gaup has been awarded several artist grants and honorary designations, and received the State guarantee income for artists in 1992, Gaup has many public commissions, and purchased by, among others, the Saami Council, Norwegian Arts Council, the Sami Collections and Northern Norwegian Art Museum. Aage Gaup was in 2007 chosen by the Association Norwegian Stage Designers to represent Norway at PQ07, Sets-Quadrennial in Prague, which is a worldwide exhibition of theater design, and the most important international meeting place for a design interested public.

He has received numerous awards for his artistic work, including the Hedda Award (2000) and Karasjok municipality Culture Award (2012).

Aage Gaup has also been involved in the Cultural School, and has worked for the Karasjok Art School was created, where he currently serves in the board.