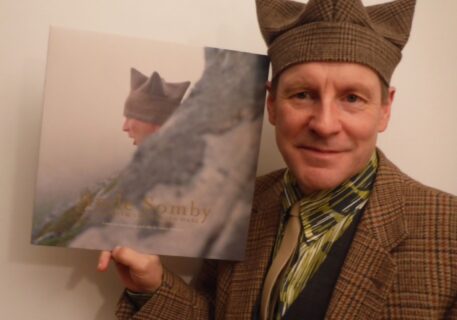 Raw and soulful yoiking in a sound installation Yoiking with the Winged Ones by Ánde Somby at SDG- Sami Center of Contemporary Art .

The large exhibition hall at SDG is filled with yoik and sounds of nature in the installationYoiking with the Winged Ones by yoiker and artist Ánde Somby. Together with sound artist Christopher Watson visitors are invited to an exclusive musical experience. Parallel with this there is an exhibition of Ánde’s hand-sewn and individually designed hats based on the traditional Sami men’s Karasjok hat.

«Yoik is Stonehenge without the stones,» says Ánde Somby when explaining what yoiking is. «The symbolic value of yoik is enormous. Yoik comes from time immemorial and has survived. Today yoik is stronger than ever, despite the Roman Empire, Christianity and nation states that declared war on yoiking,» he adds. The project Yoiking with the Winged Ones presents both the traditional yoik «Wolf» and yoiks Somby has composed himself. The yoiks are recorded live in the field, with the sounds of the place complementing the primitive power of Ánde Somby’s yoiking. Christopher Watson has made the recordings of both the yoiking and the landscape sounds of the location. The LP that was released in 2016 has now been developed into this magical sound installation and yoik sculpture at SDG, in which Watson provides 6 channel sound.

Ánde Somby is a yoiker, musician, Sami author and assistant professor in jurisprudence in Tromsø. He has been yoiking since her was 16 and as an artist since 1974. He has performed all over the world either as a yoiker himself or as a member of the bands Vajas and later Sombán. Early in life he became engaged in Sami social issues, later in the rights of indigenous peoples. Somby is a proven Sami activist. He is a colourful personality in his hand-sewn and designed Sami hats, of which he has now 80. They are being exhibited for the first time here at SDG.

Christopher Watson is a musician and sound artist. As one of the world’s finest sound recorders of animals and natural phenomena, he has made sound recordings for David Attenborough’s acclaimed BBC nature documentaries. Watson is also the founder of the influential Sheffield based experimental music group Cabaret Voltaire (1971). «The sounds of our forefathers have been lost in England, as in many other countries. But listening to someone yoiking someone or something was so raw. It gave me a real feeling of the eternal» said Watson after making the sound recordings of Ánde Somby in a mountain valley an hour’s hike from Kvalnes in Lofoten.

Elin Már Øyen Vister, also a sound artist and leader of the artist’s residence Røst Air, is the technical assistant responsible for the installation.