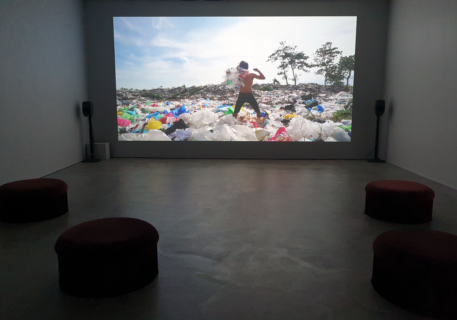 The birth of Philippine video art can be traced back to the experimental filmmakers of the 1970’s, who had interactions with German filmmakers such as Harun Farocki, Werner Herzog and many more through workshops and screenings organized by the Goethe Institut Manila, as well as the establishment of the Mowelfund (Movie Workers Welfare Foundation). Its contemporary practice is also partly influenced by the conceptual artist and art professor, Roberto Chabet.

Small Projects is founded in Manila by Filipino artist Jet Pascua. The video screening is a cooperation between SDG and Small Projects.

1.     Hollow Blocks
Jonathan Olarte (1993)
The video is a walk around, and through a community that is being forcefully evicted by a private corporation.

2.     Passenger
Pat Kay Laudencia (1997)
Passenger is about the feeling of exhaustion, isolation and fear that accompanies a woman’s daily commute across Manila.

3.     Basura (Waste)
Roberth Fuentes (1992)
A performative video and a kind of exorcism of the many issues of Bantayan Island, where the artist lives.

4.     The Wrath of Yorac
Isola Tong (1987)
Referencing a character named Yorac from a 1992 film on environmental spirits, the video is part of a series called “Trans Interiorities” where Isola explores their trans subjectivity, (trans)sexuality, ecology, anxieties, intimacies, their HIV and becomings.

5.     I’ve Been Here
Jonathan Olarte (1993)
A dramatized documentary on (((o)))’s attempt to escape the apparent realities of modern day society.