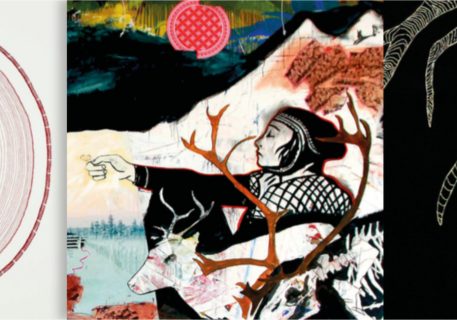 The autumn season at the Sami Centre for Contemporary Art (SDG) opens with a large group exhibition of consisting of 20 artists produced by the Sami Artists Union (SDS). The exhibition displays the versatility, impact and vitality from a first-rate selection of artists from various parts of Sápmi.

In connection with the Sami centenary celebrations in 2017 SDS chose to produce an adjudicated selection of the artwork of 21 artists for the exhibition ÁIGEMÁTKI – TIME TRAVEL. The exhibition was first shown during the centenary week in Trondheim (Tråante 2017) and was part of a comprehensive arts and cultural programme, visible throughout the city.

Visitors to this exhibition will meet objects, sculptures, paintings, graphics, textile art, art films and other forms of expression. The exhibition in Karasjok is almost unchanged from that in Trondheim, with just one artist missing.

SDS was formed in 1979 and is dedicated to organising members from Sami visual artists and arts craftsmen from Norway, Sweden, Finland and Russia. Amongst other things SDS works actively to improve conditions for artists and to ensure that members’ artwork is made available and is exhibited. Members of SDS use various practices and some work in interdisciplinary ways. They have a high artistic level, which is natural since most members have a lengthy art education from art academies, colleges and universities.

SDS spearheaded the establishment of Sámi Dáiddaguovddáš (SDG), the Sami Centre for Contemporary Art, and Karasjok Art School. It has also established stipends and other grants for artists. Besides being artists in their own right several members are also art teachers and communicators of art and are otherwise active in public debate.

Extract from Hilde Skancke Pedersen’s article in the exhibition catalogue:

“Since the 1970s Sami visual arts have often shown strong political content. The colonial and post-colonial experience that Samis carry with them look more like the experience of people in areas of the world who live in much more exposed conditions than we seemingly do.”

“Political themes also characterise today’s Sami visual arts to a large extent. The art does not appear to be pseudo-politicalcorrectness, but springs from a deep felt necessity, a care for the survival of the individual and its culture. However, the artistic expression is only to a small extent characterised by traditional culture. There are examples where the artist utilises traditional impulses consciously, often in subtle ways. For example, two works in the exhibition refer to the woodcut Ganda ja nieida(Boy and girl)by the Sami artist John Savio (1902 – 1938). Hege Annestad Nilsen allows her models to be inspired by Savio’s woodcut in her photo series In Savios fotspor(In Savio’s footprints) and Anders Sunna quotes from the same work in his painting Colonialism Inc.

“As already mentioned, Sami political visual art has a world-wide transfer value to other cultures and social conditions. Indigenous peoples not only face destructive interventions, damage to natural environments and their living conditions that weaken the chances for the survival of their cultures, but they also lack real democracy and fundamental human rights.”

“The exhibition ÁIGEMÁTKI – TIME TRAVEL insists that political art shall not represent the world but act in it.”

The complete text of Hilde Skancke Pedersen (visual artist, curator and project leader forÁIGEMÁTKI) appears in the exhibition catalogue, on sale here at SDG. The catalogue also has a foreword by Aili Keskitalo (the current president of the Sami Parliament), Hege Annestad Nilsen (former chairman of SDS) and an essay by Jan-Erik Lundström (former director of SDG).