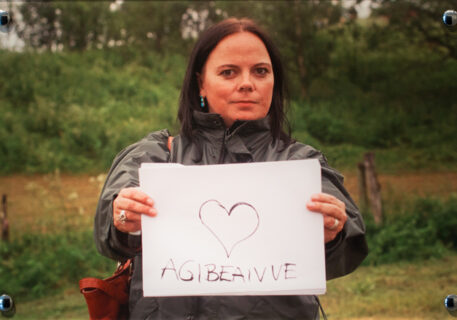 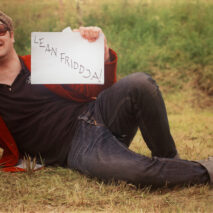 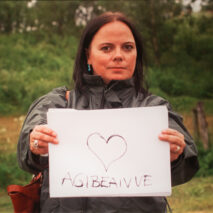 ČSV Noen tanker (ČSV: A Few Thoughts) by the Russian photographer Sergey Gavrilov is a project on the movement ČSV.

The political movement of the Sámi that took place in the 1970s and 1980s was in many ways like the break-up of ice. The enthusiasm of this time of creation often found expression in the sphere of art. Young Sámi wanted to have back everything that they had lost. It was a political and cultural flourish with no comparison in Sámi history. ČSV became a concept. For example, it can mean: Čájet Sámi Vuoiŋŋa! (Show Sámi Spirit!)

At a cultural seminar in Sirma in 1972, the participants were asked to come up with small phrases or slogans on the basis of these three letters. The phrases and slogans were then defined as the Sámi table of duties.

In his exhibition, Gavrilov brings back to us what happened in those days by asking a group of young Sámi to write down words that they connect with ČSV. His project deals with how ČSV is understood and interpreted today. Is the expression still present in the Sámi political spririt?

The exhibition also shows Gavrilov’s film ČSV, which is part of his bachelor’s degree in journalism.

The exhibition is displayed simply, with no drama; it is almost silent but reflects nevertheless big emotions.

Sergey Gavrilov (28) comes from Lujavrri on the Kola Peninsula.  He has a degree in teaching history from the University of Murmansk, and, in June 2013, he completed his bachelor degree in journalism at the Sámi University College in Kautokeino. He has been engaged in photography since 2009 and established a company called Gavrilov Media in 2012.