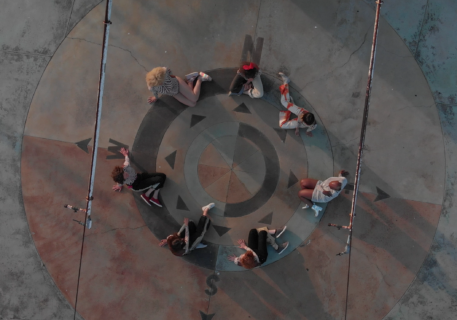 The two artists Tanya Busse and Emilija Škarnulytė began collaborating under the name New Mineral Collective (NMC) while they both studied at the Tromsø Academy of Art and Creative Writing. NMC is described as a platform for examining humanity’s effect on and interventions in the earth’s crust. While NMC concentrated on the European High North in its earliest pieces, the collective has now also visited parts of North America and the Middle East to carry out research there and create new works. They did so in order to expand the project’s scope, both geographically and politically.

The exhibition “Erotics of Counter-Prospecting” presents works from 2013 to 2019, in the form of moving images, lightbox photographs, installations, newspaper and text.

The exhibition is a continuation of this year’s festival exhibition during the Tromsø International Film Festival and is shown in Karasjok as part of a collaboration between SDG and the Tromsø kunstforening.

The artists will be present during the opening.
The exhibition is opened by SDG’s director Kristoffer Dolmen.