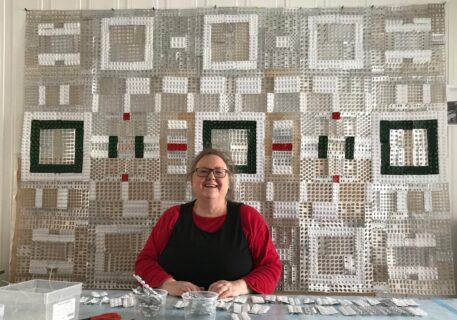 Hilde Skancke Pedersen’s exhibition is one of the largest separate exhibitions that a single artist has had at Sámi Dáiddaguovddáš, the Sami Centre for Contemporary Art. She is making use of all the centre’s available rooms: the main galleries, the blackbox, the foyer and the sound studio. It has taken 3 weeks to complete mounting artwork, building installations in the exhibition rooms and finalising the protracted process, which started with the artist’s first ideas, into this magnificent result. The exhibition is the culmination of several years work and fills the centre in an uplifting manner. Visitors will experience a “WOW!” factor on meeting this artwork. Hilde is not afraid to take on large formats and time-consuming work.

The artworks in the exhibition are multifaceted: architectural installations, video, images of materials, textile work and paintings. The exploration of the materials are striking. They bear the mark of lived life; some have been found and collected, others are reused from previous scenographic works but through the compositions, their previous functions have been erased.

On entering room A visitors go through a large architectural structure built of wood, rope and textiles, entitled Čiehká – Skjul – Shelter. Another major work in the exhibition is a 7.5 metre long textile work entitled Bassi várri – Hellig fjell – Sacred mountain. In the next room there is a large installation with a series of gouaches entitled Áhkkut – Bestemødre – Grandmothers inspired by, and a tribute to, women Hilde has observed in her home village Kautokeino.

Hilde Skancke Pedersen was born in Hammerfest and lives in Kautokeino in the Finnmark region of Northern Norway.

She graduated from the Oslo National Academy of the Arts and also completed a two-year course in creative writing at the Arctic University of Norway in Tromsø.

Her primary focus is on visual art, including art films, but she also works as a playwright, poet, scenographer and costume designer for both theatrical and dance productions. When working within all these genres, she is influenced by life in Finnmark and in Sápmi as a whole. The culture, nature, climate and surroundings both there and in other regions she has visited turn up as ideas and impulses in her individual works of art.

Skancke Pedersen often works across genres in the nexus between visual art and the performing arts, which results in a variety of artistic expressions within the performance genre. As a visual artist, her masterpiece is considered to be her two-sided commissioned work for the assembly hall and lobby of the Sámi Parliament of Norway in Karasjok. She has held several solo exhibitions and has participated in many group exhibitions in Norway and abroad. As a curator she has worked with art for exhibitions, public spaces and museums.

She is politically active, also in regard to artists’ rights, and has held many positions in Sami and Norwegian artist organizations. She is an artistic partner in the Dáiddadallu artist collective.

Skancke Pedersen has exhibited at venues such as Moderna Museet in Stockholm and at the art museum in Murmansk, Russia. She has participated in performance groups in Gothenburg and in Kautokeino and shown a solo performance in New York.