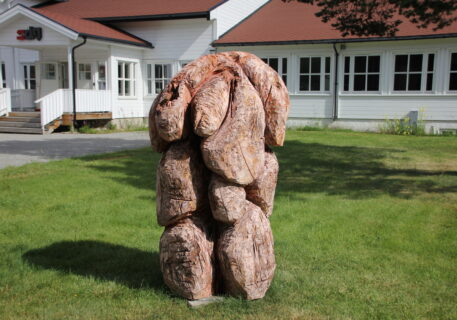 In July 2018 the Sami Centre for Contemporary Art (SDG) introduced its own platform for exhibiting art in the foyer and on the outside area of the centre. The series will display selected works by artists who focus on material-based handicraft and practical knowledge.

The first artist is Gunvor Nervold Antonsen with a textile in the foyer and a wooden sculpture on the lawn. In displaying these two pieces of artwork in Karasjok the artist wishes to pay tribute to the artist Iver Jåks:

“The art of Iver Joks is artistically valuable to me, also by virtue of his vision of humanity and his spirituality. His artwork displays a kind of ecological mindset. For many of his sculptures he used materials just as they were in nature, putting them forward, perhaps isolating them, or shaping them further in form and essence so that in the end they can dissolve and end their own life cycles.Jåks formed a sacred tribute to the powers of nature and was concerned with the importance of nature itself. Even though his works are comments on the increasingly alienation of people, I experience his artwork as basically positive in its faith in human-beings.”

To be “esla te”, reared up, says something about the formation that takes place during adolescence, through inheritance and environment: the value of being location-bound and feelings of affiliation; the ties of human beings to their place of growing up that later in life perhaps mostly exist as just an idea; the feeling of belonging, as a concrete physical bond or a feeling of responsibility that you will not or cannot leave behind you. Iver Jåks returned to the north after a long stay away from his original milieu. His artwork bears the stamp of respect for materials and elements from his childhood.

Esla te is a rough, heavy sculpture that seems rooted to where it stands. It may be a metaphor for the physical sculpturing that happens to a person during adolescence, in love towards its surroundings.

The large textile Vår(Spring) alludes to spring with the earth sprouting, the beginning of life from the sprouting place. In the different red tones we see upwards various layers in the format. In spring faith in the cycle of life grows as do human beings.

Gunvor Nervold Antonsen (born 1974, Oslo) is a visual artist who lives and works in Rollag in Numedal, Buskerud. She works with a wide range of materials and unites textile montages, wooden sculptures, paintings and historic objects in spatial material compositions. Using experimental and expressive language she takes up themes connecting to an interdisciplinary understanding of society, existence and identity and to the value of immaterial knowledge with a local grounding. Her artwork often reflects different spiritualities, life cycles, choices of values and questions the consequences of politicised conformism.

Gunvor Nervold Antonsen was educated at Bergen Academy of Art and Design and Berlin Weissensee School of Art. She has had a wide range of separate exhibitions at institutions such as House of Foundation, Moss (2017), the Textile Fashion Centre, Borås, Sweden (2016), Akershus Art Centre (2013), Soft Gallery, Oslo (2010) and Kunstnerforbundet contemporary art gallery, Oslo (2018, 2013, 2004). Among others she has taken part in a number of group exhibitions in places such as Kunsthall Stavanger (2018), Kunstnerforbundet (2017), Bomuldsfabriken art gallery, Arendal (2017), Wildlife Sculpture Park, Nesodden (2017-2020) and the Sculpture Biennial at Vigeland Museum, Oslo (2016). Antonsen’s art work has been acquired by KODE, Norges Bank, the National Museum of Decorative Arts and Design, Nordenfjelske Kunstindustrimuseum, the Ministry of Foreign Affairs and the Arts Council Norway.