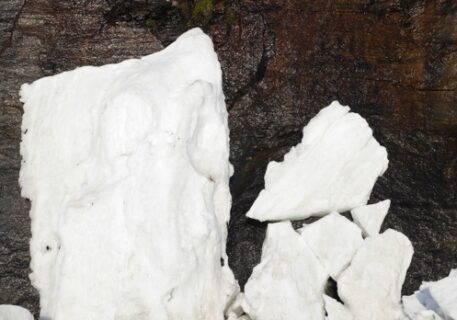 Artist Geir Tore Holm (b. Tromsø, 1966), comes from Olmmáivággi/Manndalen, Troms. Since 2010 he is a farmer at Øvre Ringstad in Skiptvet, Østfold. Parallel to work with video, photography, sculpture, performance and installations, Geir Tore Holm has mediated, written about and been teaching in contemporary art since finishing studies at Trondheim Academy of Fine Art in 1995. By initiating Balkong in 1993, with the home as artspace the contexts of artistic practice and work with dialogue has been central, as well as ecology, indigenous peoples issues, farming and social engagement. In 2003 he initiated the infinite Sørfinnset skole/ the nord land in Gildeskål, Nordland together with his partner Søssa Jørgensen. He is a participant in Ensayos, a collective research project rooted in the natural park Karukinka in Tierra del Fuego, Chile. Geir Tore Holm was the head of project establishing the Academy of Contemporary Art and Creative Writing, University of Tromsø in 2007 and is a fellow at Oslo National Academy of the Arts with the artistic research project Poetics for Changing Aethetics. He is a holder of the National Grant for artists and receiver of the John Savio Prize 2015.