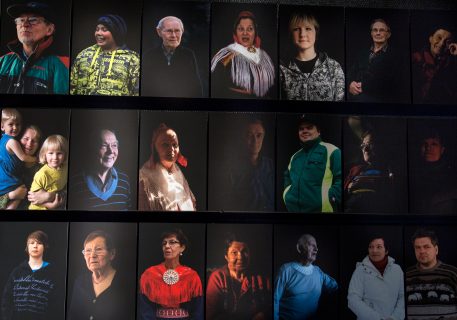 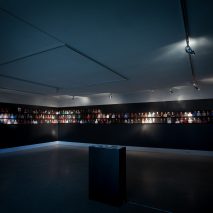 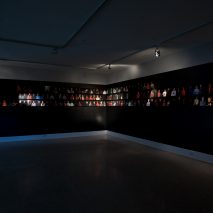 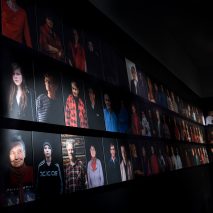 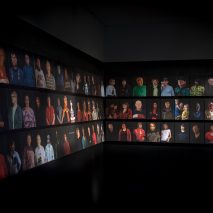 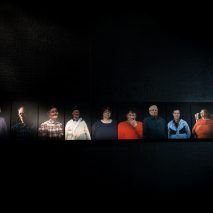 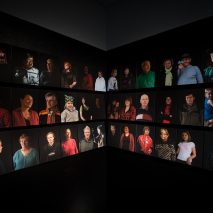 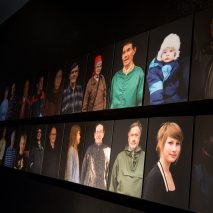 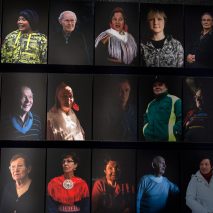 The Sami Center for Contemporary Art presents Elina Juopperi’s installation All the Ones that Speak the Language Minus 30, a tribute to and a memorial of the Inari Sámi language and Andreas Gedin’s Chinese Whispers, three works on the conundrums of human language.

Less than 300 now living persons speak the Inari Sámi language, a fact which places it among the many endangered languages in the world. Elina Juopperi’s project, All the Ones that Speak the Language Minus 30, documents the present status of the Inari Sámi language and emphatically articulates its conditions of survival.

The installation consists of 245 photographs, photographic portraits where the artist has imaged almost all persons speaking Inari Sámi today. Of the 300 persons documented as speakers, some denied being photographed and some were simply not found. These portraits, furthermore, also give access to the level of proficiency in each individual as each portrait is given more or less dark shading in direct correspondence to that particular person’s present capacity in speaking: Is she/he a fluent speaker or only remembering a few words? In addition to the photographic work, Juopperi has also pursued interviews and recordings of the language in use today in the Inari area; all of which are included as interactive sound furniture in the exhibition.

Inari Sámi is a Sámi language which belongs to the Fenno-Ugric group of the Uralic language family. Inari Sámi is however only spoken within the Inari municipality in Finland. It is the smallest and most endangered of the Sámi languages, partly due to the fact that Sámi families in Inari earlier took to Finnish than other Sámi groups in Finland and elsewhere.

Language is of course one of the fundamental elements of human culture and identity. If a language disappears, becomes extinct, then a part of the very fabric of human culture is irrevocably lost. How may the Inari Sámi speakers manage to pass on their mother tongue to the next generation?

In papallel to “All the Ones that Speak the Language Minus 30”, Andreas Gedin presents his work “Chinese Whispers”.