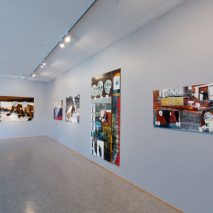 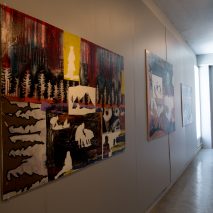 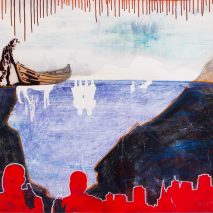 Anders Sunna is a young artist who likes to provoke. The exhibition Got Democrazy consists of collages and installations, showing images that make contradictions between reindeer herding and politics visible. Sunna wants to tell us about how society works and what the world really looks like. He deals with the history of his own family and other reindeer-herding Sámi in Sweden. His pictures often tell several stories while his collages and installations tell the reverse side of the stories, as he also wants to show the not-so-beautiful reverse side of things.

Anders Sunna decided already as a young boy to become an artist. He got the opportunity to work together with the artist Lars Pirak for a period, developing his own style during this time. Anders Sunna was born in 1985 in Kieksiäisvaara in the municipality of Pajala, Sweden. He has got his training at the University College of Arts, Crafts and Design in Stockholm (Free Art), and at the art school Umeå Konstskola. He has participated with his art in the spring exhibition of Liljevalchs in Stockholm and had several exhibitions in, for example, Umeå and Stockholm. In 2009 he was the Young Artists of the Year at the Riddu Riđđu Festival.

Together with photographer Michiel Brouwer, Anders Sunna has attracted a great deal of attention in Jämtland and Härjedalen with the exhibition Maadtoe. The exhibition shows the dark history of how the Sámi have been – and still are – treated in Sweden.