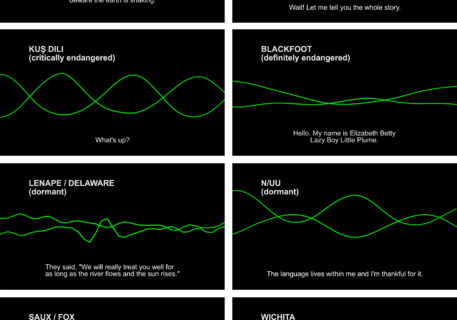 Language is central to Hiller’s work, and The Last Silent Movie (2007) and Lost and Found (2016) invoke language itself as a cultural construction that contains and generates worlds.

In The Last Silent Movie we hear recordings of extinct and endangered tongues. A stunning variety of sound waves seek to trigger the neural responses of understanding and communication: but each language is dying or, like many of the speakers we hear, now dead. Instead of understanding the sounds, on an otherwise blank screen our eyes read the meaning of the phrases, translated into subtitles of a still-dominant language, one that has been instrumental in silencing the speakers of Lenape or those of Southern Sámi.

Lost and Found continues her focus on language groups and their speakers but now includes languages that might be leaving the archive to be spoken in the present and the future. As if to reinforce the physicality of these possible returns and survivals, a flexing green oscilloscope line tracks the sound made by the voiced plosives, fricatives, and aspirations. This moving wave also acts as a synecdoche for the arena of technology; although the production of a prevailing and flattening culture, it also operates as a platform used by the excluded and the marginalized for agency and expression. Technology allows the voices of the dead to be heard. On being heard, these voices return to the living to be mouthed, to articulate the particular mappings and experiences of the worlds that these languages describe and contain.

Who is Susan Hiller:
http://www.susanhiller.org/about.html