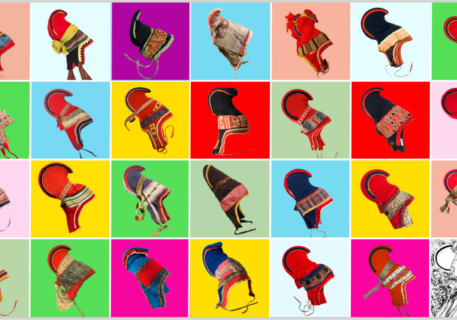 The exhibition Rematriation of a Ládjogahpir – Return to Máttaráhkká is part of an art and research project Máttaráhku ládjogahpir – A Foremother‘s Horn Hat. The project is a collaboration between Sámi artist Outi Pieski and Finnish researcher Eeva-Kristiina Harlin. A book, edited by Jan-Erik Lundström and published by Davvi Girji, will be released at the end of the exhibition period.

The ládjogahpir is a graceful, striking and elaborate headgear that was used by Sámi women until the end of the 19th century in the area of Sápmi that today is Northern Norway and Finland. The hat’s most prominent feature was its upright appearance with a curved upper part, shaped by a wooden piece, known as the fierra, inserted into the fabric of the hat. There is a recurrent narrative, even folklore in the Sámi society, which states that priests forbade the use of this hat, claiming that the devil lives in the horn-shaped fierra. The priests thus seized the hats, and like the sacred drums, the hats had to be burned.

Outi Pieski (b. 1973) is a Sámi visual artist based in Ohcejohka (Utsjoki) and Numminen, Finland. Her paintings and installations delve with the Arctic region and the interdependence of nature and culture. Her work combines the Sámi handicraft tradition of duodji and contemporary art practices to reopen conversations about the Sámi people within transnational discourses. As a member of The Miracle Workers Collective (MWC) Pieski has been currently exhibiting in the Finnish Alvar Aalto Pavilion at the 58th International Art Exhibition – La Biennale di Venezia (2019). There she presented her site-specific sculptural installation Ovdavázzit – Forewalkers (2019), which is part of the project Máttaráhku ládjogahpir (A Foremother’s Horn hat) in collaboration with archaeologist Eeva-Kristiina Harlin and the project Rájácummá (Kiss from the Border) in collaboration with Sámi artists and activists Jenni Laiti and Niillas Holmberg. The installation deals with Sámi self-government that abides with the Sámi philosophy of ‘agreeable life’, soabalaš eallin, which points to the preservation and support of biodiversity in both nature and humans. Since graduating from Helsinki’s Academy of Fine Arts in 2000, Pieski has exhibited in Sápmi and internationally. She was an Ars Fennica Award candidate in 2015 and won the Fine Arts Academy of Finland Award in 2017.

Eeva-Kristiina Harlin (b. 1972) is a doctoral researcher at the University of Oulu, Giellagas Institute (Institute for Saami Studies) in Finland. Her doctoral dissertation deals with Repatriation politics of tangible Sámi cultural heritage. She has worked at the Finnish Heritage Agency, the Historical Museum in Sweden, SIIDA – The National Museum of the Finnish Sámi, RiddoDuottarMuseat in Norway and the Sámi Archives of Finland. She has worked with themes like Sámi cultural heritage and repatriation questions together with the Sámi society for a long time. Harlin has conducted surveys regarding Sámi cultural heritage in Nordic and European museums and she is currently doing a survey of Sámi archival materials in European institutions. In addition to Sámi collections and repatriation she is specialised in ethical questions in archaeology related to Sámi culture. Máttaráhku ládjogahpir (A Foremother’s Horn Hat) also forms part of her doctoral research.

Last day of the display November 3.