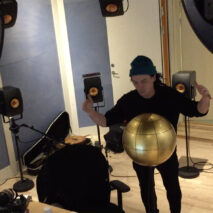 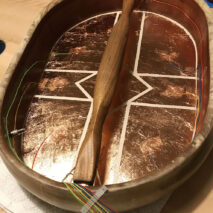 The old meets the futuristic in OMNI ANIMA – a cross-artistic cooperation project between the Sami artist and composer Torgeir Vassvik and artist Ståle Stenslie. The project transforms traditional “joik” to become stronger through interactive electronic media and make available “joik” as contemporary music, thus protecting the genre as an art form.

The purpose of the project is, among other things, to use new technology to convey and develop old forms of “joik” and throat singing through interactive and multi-channel sound (holophony).

The Latin words, Omni Anima, are interpreted for everything. OMNI ANIMA put the audience in trance like the noaide (Sami shaman) used “joik” to achieve. Through the trance, the shaman spirit travels into the world of the Sámi spirits. The interactive drum of the project creates animated sound, which come alive in and through the audience.

Torgeir Vassvik (1962) is responsible for the music and composition of Omni Anima. He is a Sami composer and vocalist who combines the “joik” and throut singing with traditional Sami instruments and natural sounds. He is by some called “The Sound Magician”. Vassvik’s albums Sáivu and Sápmi were met with good reviews.

Ståle Stenslie (1965) from Elverum stands for project design and execution. Ståle Stenslie is a Norwegian artist and curator, with a PhD. Architecture and Design College in Oslo (2010).

In his own artistic work he has been a pioneer figure on the international electronic art scene. In addition, he has been an exponent of cognitive and perception-manipulating art projects where interface technologies and new digital tools have provided the framework for his work in the fields of art, media and network research.

Thom Johansen from Notam is responsible for technology and programming.

The project opens with a live performance Saturday, September 2nd. The installation will take place until 22.10.2017.